He is down to earth, approachable and his ardent supporters state he has “demystified the presidency”.

At the time of his initial victory around seven years ago, candidate Kenyatta was facing an indictment by the International Criminal Court (ICC) on charges of crimes against humanity.

The US and British governments had warned Kenyans that it would not be business as usual if Mr Kenyatta and his deputy William Ruto, facing similar charges, were elected.

The Americans warned “choices have consequences” while the British cautioned that relations with Kenya would be scaled back to “minimal contact”.

However, Kenya under President Uhuru has been anything but a rogue state.

Kenya is a key ally for western powers, especially against the al-Shabaab Islamist militant group based in neighbouring Somalia, and it didn’t take long for its leaders to decide that their strategic economic and security interests were more important than their stance on Mr Kenyatta’s presidency.

Uhuru’s presidency has put Kenya on a global map.

President Uhuru Kenyatta, who is serving his second term as the country’s fourth president, has dedicated himself to a path of unity and more inclusive economic development.

Kenya a pivotal player and a jewel of East Africa has, from independence in 1963 to the present day, enjoyed political stability, shift from one-party rule to multi-party democracy and gradual economic development. But critics point out that its progress has not been optimal because of a combination of tribalism, disputed elections and corruption.

President Uhuru Kenyatta, the fourth President who is now in his second and final term, is committed to the renewed politics of unity and sustainable progress.

Kenyan politics is shaped by complex calculations and bargains struck among leaders of the major tribes, namely, the Kikuyu (from whom three of four Kenyan presidents have come so far), Luhya, Luo, Kalenjin, Kamba and others.

Kenyatta’s sensible way of dealing with the perennial political-tribal conundrum has been to motivate the people to concentrate on faster and more inclusive economic development through his comprehensive four-point national agenda: 1) enhance the manufacturing sector’s share in GDP from 9.2% to 20%; 2) food security and nutrition; 3) universal health coverage, and 4) affordable housing.

The country has shown a good record of growth so far.

Successfully hosting a global conference on the ‘Sustainable Blue Economy’ in November 2018, it further strengthened its credentials as a government genuinely committed to growth, but growth which is in harmony with the environment.

This is relevant also because Kenya finds itself in the middle of an infrastructure boom today. New highways, roads, flyovers and housing complexes dot the landscape.

The new railway, connecting Mombasa with Nairobi, built with China’s assistance, has been projected as “a story of remarkable success and national pride.” 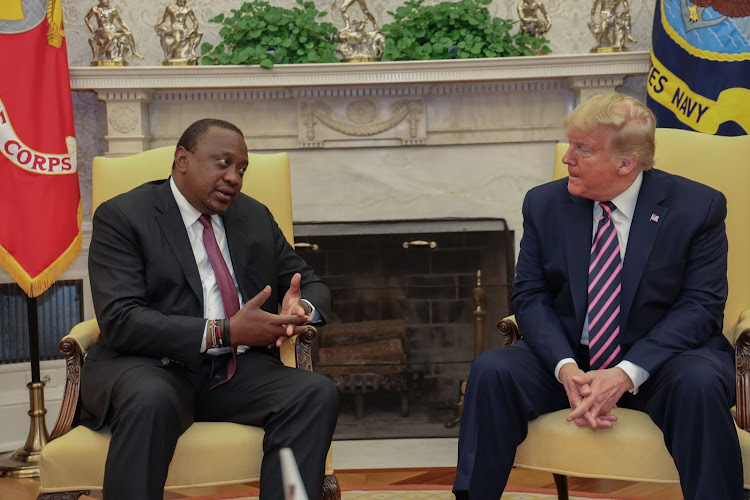 The U.S. views Kenya as the region’s business, financial and transportation hub. An inaugural session of the bilateral strategic dialogue took place in Washington in May 2019, which covered not only economic and defence cooperation, but also democracy and governance, regional and multilateral issues.

Besides China and the West, Japan is treated as a leading partner. Nairobi had the rare distinction of hosting the only Japan-Africa Summit held outside Japan since its inception in 1993: the sixth Tokyo International Cooperation on African Development (TICAD-VI) took place in the Kenyan capital in August 2016.

To crown Uhuru’s diplomacy, Kenya recently clinched non-permanent seat at the UN Security Council (UNSC) after garnering 129 votes which are above the required threshold of two-thirds of the cast votes. Its main rival Djibouti garnered 62 votes.

Finally, there is India, probably Kenya’s oldest partner since exchanges predate the arrival of colonialism with whom it shares a strong political, cultural, diasporic and economic relationship. Political cooperation received a fillip through successful visits by PM Modi in July 2016 and President Kenyatta’s visit in January 2017.

Kenyatta’s leadership has succeeded in channelling the nation’s energy in a positive direction. Kenya is now ranked 61 on the ‘Ease of Doing Business’ index, a jump of 19 places; it is fired by the ambition to enter the hallowed top 50 category by 2020.

Foreign investment is flowing in as the international community watches with heightened interest. Kenya’s leaders need to practice the politics of harmony and integrity. Should they succeed in according a higher priority to the people’s interests rather than their own, there may be no holding Kenya back.

Reactor Review tells the story as is, fearless, without worrying about the whims of fickle advertising and sponsorship rules. We are a dedicated team, whose main interest is putting you in the loop on matters you cannot live without having a grasp on. If you have anything to share, our email is always open.

mlST5cHmFg - July 13, 2020
0
Similarly, six of the seven African-Americans who deserved Medals of Honor for valor in Italy during World War II were dead by the...

mlST5cHmFg - July 13, 2020
0
Over the last few weeks, America’s elite colleges and universities have been announcing their reopening strategies one by one, weighing explicit health imperatives...