Sonko was seen partying in the company of four friends as they shared drinks while seated around a table and appeared to be in a jovial mood.

The Governor was seen to be scrolling through his phone while his friends conversed as only one of them had correctly donned their mask. 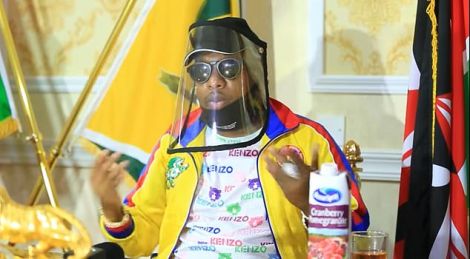 The former Nairobi Governor was conspicuously missing as Uhuru commended NMS for their 100 days in office at Harambee House in Nairobi where he received a report.

While partying Sonko was also facing a team of Ethics and Anti-Corruption Commission (EACC) officers who raided his Upper Hill office in relation to investigations into the acquisition of the multi-million shilling property.

EACC had been probing how the governor came to acquire the posh property from Kenya Railways Staff Retirement Benefits Scheme.

Sonko has been overlooked on some occasions including when Mombasa Governor Ali Hassan joho, Kwale’s Salim Mvurya, and their Kilifi counterpart Amason Kingi were invited to State House Nairobi on Saturday, April 25.

After the NMS 100 days celebration, the President toured some of the agency’s projects in Nairobi’s informal settlements.

The president noted that he was satisfied that the directives for the first 100 days had been implemented in earnest.