KIGALI, Rwanda (AP) — Paul Rusesabagina, portrayed in the film “Hotel Rwanda” as a hero who saved the lives of more than 1,200 people from the country’s 1994 genocide, has been arrested by the Rwandan government on terror charges, police announced on Monday.

A well-known critic of President Paul Kagame, Rusesabagina had been living outside Rwanda since 1996 and police did not say where he was apprehended. He had been living in Belgium and then in Texas in the U.S.

Rusesabagina’s daughter told the Associated Press that he traveled last week from the U.S. to Dubai, where he was kidnapped and taken to Rwanda.

In handcuffs and a facemask, Rusesabagina, 66, was shown to the press in Rwanda’s capital, Kigali, on Monday by police. He has not yet been formally charged in court.

“Through international cooperation, the Rwanda Bureau of Investigation wants to inform the general public that Paul Rusesabagina has been arrested,” police said in a statement Monday.

“Rusesabagina is suspected to be the founder, leader, sponsor and member of violent, armed, extremist terror outfits including the Rwanda Movement for Democratic Change (MRCD) operating out of various places in the region and abroad,” police said. 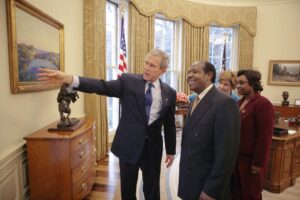 FILE – In this Thursday, Feb. 17, 2005 file photo provided by the White House, President Bush, left, and first lady Laura Bush, 2nd right, meet with Paul Rusesabagina, center-right, and his wife, Tatiana, right, in the Oval Office. Paul Rusesabagina, who was portrayed in the film “Hotel Rwanda” as a hero who saved the lives of more than 1,200 people from the country’s 1994 genocide, and is a well-known critic of President Paul Kagame, has been arrested by the Rwandan government on terror charges, police announced on Monday, Aug. 31, 2020.(Eric Draper/The White House via AP )

Rwanda’s police said they had issued an arrest warrant for Rusesabagina to answer charges of serious crimes including terrorism, arson, kidnap and murder, perpetrated against unarmed, innocent Rwandan civilians on Rwandan territory. Police told the media in Kigali that investigations against Rusesabagina will continue and more information will be released about his alleged activities.

Carine Kanimba, Rusesabagina’s daughter, said the family was informed early Monday that he was being held in Rwanda. She said none of the family has been able to speak to him and they are worried he may not be getting his hypertension medication.

Kanimba, 27, reached in Washington, D.C., said she last spoke with Rusesabagina last week before he flew to Dubai, but that she didn’t know the exact purpose of his trip.

The state-owned RwandAir has direct flights between Dubai and Kigali.

Rusesabagina is a Belgian citizen and a permanent resident of the United States, Kanimba said.

“We’re hoping to secure his release quickly and safely,” she said.

Kanimba said her father has long been a target because of his vocal criticism of the Rwandan government.

“What they’re accusing him of is all made up,” she said “There is no evidence to what they’re claiming … We know this is a wrongful arrest.”

Rusesabagina has previously denied the government’s charges that he financially supports Rwandan rebels.

Rusesabagina has been a prominent critic of Kagame’s government, calling it a dictatorship and urging Western countries to press the government to respect human rights.

Rusesabagina has won numerous international honors including the United States Presidential Medal of Freedom, which President George W. Bush awarded him in 2005, and the Lantos Human Rights Prize in 2011.

“I believe it is a travesty that a human rights champion like Paul Rusesabagina should be captured, detained and held in the way he is being held,” said Katrina Lantos Swett, president of the Lantos Foundation for Human Rights and Justice. “This should raise a lot of deep concern and skepticism on behalf of a lot of people.”

The Rwandan government disputes Rusesabagina’s story about saving survivors at a hotel in Kigali during the genocide, in which more than 800,000 Tutsi and Hutus who tried to protect them were killed by Hutus.

The 2004 film “Hotel Rwanda” showed Rusesabagina, a Hutu married to a Tutsi, as using his influence as a manager of the Hotel des Mille Collines, to allow more than 1,200 Tutsis to shelter in the hotel’s rooms. In the film, Rusesabagina was played by actor Don Cheadle.

mlST5cHmFg - September 23, 2020
0
Deputy President on Tuesday, September 22 made an impromptu visit at the Jubilee Party Headquarters in Pangani accompanied by Lang’ata...

City tycoon was ordered to compensate me sh 2.5 million

Gov’t in Sh.200 M for upgrade of Aquaculture Research Centre –...

September 10, 2020
We use cookies to ensure that we give you the best experience on our website. If you continue to use this site we will assume that you are happy with it.Ok