The Kenya Medical Supplies Authority (Kemsa) has been on the spot over allegations of illegal procurement processes and buying Covid supplies at exorbitant prices.

Kemsa exclusively procured Covid-19 related supplies from select firms at pre-set prices on the directive of the Health ministry, the agency’s board confirmed.

Kembi Gitura, the board chairman of the authority which buys drugs for all public health facilities in the country, said Health Principal Secretary Susan Mochache issued the instruction via a letter in April.

“We received a letter from the Ministry of Health containing a list of where we should procure from, the prices and the quantity. I can vouch on the quality of PPEs we procured,” he said when he appeared before the Health committee of National Assembly to shed light on claims of Covid-19 related procurement fraud at Kemsa.

In the letter dated April 15, 2020 addressed to suspended Kemsa CEO Jonah Manjari, the PS claimed that the World Bank had identified and approved various items to be procured by the State agency.

In the letter, the PS directed the agency to source N95 face masks from specified suppliers despite higher prices. The price lists attached to the letter show a stark discrepancy in prices with the company that bid the least given the lowest quantity to supply.

The agency would have bought more supplies if the tenders would have been awarded to the lowest bidder.

However, Mochache’s letter, which will now be at the centre of the probe by investigative agencies, occasioned taxpayers billions of shillings in high prices of goods supplied.

She also instructed Kemsa to source ventilators from Megascope which supplied 30 pieces at Sh2.8 million each; 11.5kg medical oxygen from BOC Kenya and quarantine tents.

MPs raised issues with the price variations and why expensive bidders were awarded the lucrative contracts at a time the country was frantically sourcing for Covid-19 supplies.

MPs also raised questions about the involvement of Kilig Ltd, which was touted to have supplied items worth Sh4 billion.

The Health ministry had denied directing Kemsa on the Covid-19 related procurement when its officials appeared before the Parliamentary committee at an earlier date.

President Uhuru Kenyatta ordered speedy investigations into the suspected procurement fraud at Kemsa within 21 days. This came after the National Assembly’s Public Accounts Committee (PAC) also ordered a forensic audit on the Sh134 billion allocated for fighting Covid-19 amid public uproar over misuse of the funds.

The PAC directed the Auditor-General Nancy Gathungu to audit cover the expenditure period between March 13 when the first case was reported in the country and July 31.

Dr Manjari was suspended alongside directors Eliud Muriithi (Commercial) and Charles Juma (Procurement) to allow for the investigations into claims of procuring Covid-19 emergency kits at exorbitant prices.

The company according to a document seen by Kenya Insights of firms that supplied Kemsa with Covid equipments is perhaps the biggest or amongst the top beneficiaries who secured the tenders.

According to our analysis, Megascope supplied Kemsa with Covid supplies valued at Sh 1,103,500,000 cumulatively.

The company was the subject of Nation Media Group’s latest investigation into the disappearance of more than half of COVID-19 medical equipment donated to Kenya by Chinese billionaire Jack Ma.

In the report dubbed #COVID-19Millionaires, Okari exposed how the equipment, which included face masks, testing kits, and Personal Protective Equipment (PPE) found its way to neighbouring Tanzania, with a few individuals pocketing millions of shillings from the sale of what was meant to boost Kenya’s fight against the deadly pandemic.

The consignment arrived at the Jomo Kenyatta International Airport (JKIA) on March 24th from Ethiopia and was received by Health Ministry’s acting Director-General Patrick Amoth who while addressing the press that day noted that the equipment would be immediately deployed to help the Kenyan people tackle the scourge of Coronavirus.

However, some very powerful people had already hatched a plan to steal the consignment and make a kill from it. According to the NTV’s report, the Ministry contracted two companies; Megascope Limited and Crown Healthcare Limited to offload the consignment from the airport.

NTV reported that the equipment was transferred to a private warehouse in Nairobi and later shipped to Tanzania by road and crossed the Namanga border under tight police protection. The consignment was sold to a dozen of Tanzanian companies.

Dr Godwin Agutu, the Director of Network Action Against Corruption (NAAC), an organization that has been monitoring how COVID-19 funds are spent, said the remaining equipment was given to some private companies that later supplied them to the government at inflated prices.

It also emerged that various authentic companies that were KEMSA suppliers were denied tenders while companies from well-connected people received the multi-million deals when the pandemic struck. Faceless cartels were also said to be using shadow companies to receive payment from the authority even without supplying any goods or services.

Megascope however, distanced itself from the allegations raised, noting that it was never contracted by the Kenya Medical Supplies Authority to clear the consignment of donations on behalf of the agency.

The company said it did not receive any donations from China or anywhere else for distribution to Kenyans.

“Our client did not receive any masks or any other material whatsoever from Jack Ma or any other donor for distribution to Kenyans. Having not received any kits from any country or any donor for distribution, our client did not divert, resell or misappropriate any kits as alleged or at all.” Lawyers representing Megascope wrote to NTV in demanding apology.

Megascope dismissed the claims that the company’s directors are political fanciers as alleged in the report. The lawyers said their client has not manipulated any system and is neither a fraudster, looter or thief.

“The malicious intent of the programme is evident from the fact in making the scurrilous and highly damaging allegations that you did against our client, you offered no evidence whatsoever to the viewers in support of the highly emotive allegations of great public interest to Kenyans.”

The company said it has built its reputation in the health sector over the years but all that has been irredeemably damaged by the false and reckless allegations.

It said the report has exposed it and continues to expose it to ridicule, humiliation, hatred, scandal, odium and contempt in the eyes of all members of the society globally as is evidenced by the ever-growing adverse mentions of the client across various online platform.

Megascope had demanded for NTV to pull down the  investigative piece. They never did.

According to the Kemsa Suppliers document seen by Kenya Insights, the advantaged Megascope supplied Kemsa with the following;

Read the Document below

A quick search on the internet will show one that Megascope is owned by people very closely associated with President Uhuru Kenyata.

Megascope Healthcare chief executive Richard Ngatia is definitely a titan in the corridors of power.

He was elected president of the Kenya National Chamber of Commerce and Industry last year, a position that sees him influence trade policies as well as interact with Cabinet secretaries.

Ngatia is best known for his ownership of the Galileo Lounge in Nairobi, a premier entertainment joint on Waiyaki Way.

In a tweet published by former State House Secretary for Digital Communication Dennis Itumbi who claimed that Megascope Limited is the same company that was awarded the tender to construct the recently launched Level 3 hospitals in Nairobi’s slums.

But Just incase you think @DCI_Kenya cares about Serious Investigations. Ask them to establish how #MEGASCOPE the same company associated with #Covid19Millionares is the one doing the recently launched hospitals in the city. Zoom on this photo (Billboard) to see what I am saying. https://t.co/F6pukkeUQo pic.twitter.com/NlvZRM32PC

President Kenyatta recently launched the construction of three new hospitals which are set to be put up in Muthua ( Uthiru), Kianda in Kibra, and Maendeleo Village in Mukuru Kwa Reuben. 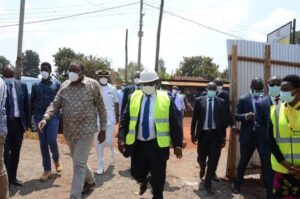 President Uhuru and Megascope CEO Ngatia (in reflector) during the commissioning of the project.

The three health facilities will have a capacity of 16, 16, and 24 beds respectively and their construction will reportedly be undertaken by the Nairobi Metropolitan Service (NMS) at an average cost of Sh70 million each.

Sources indicate that KEMSA cannot account for at least 42 billion shillings with the majority of it having been lost through unscrupulous procurement procedures that saw people awarded tenders and paid without supplying anything.

At the same time, KEMSA is said to have a stock of medicine worth 6 billion shillings that is nearing expiry but cannot sell it because they bought it at inflated prices. The only way to sell them off is at a loss but the agency is still mute about the issue.

Opinion | In Pakistan, the Rising Tide of Climate Disasters

mlST5cHmFg - September 27, 2020
0
Not far from that drowned village in Sindh is the city of Jacobabad, where temperatures in the summer run as high as 124...

Opinion | Is Amy Coney Barrett Joining a Supreme Court Built for the Wealthy?

mlST5cHmFg - September 27, 2020
0
Much of the public anxiety about Amy Coney Barrett — judge on the U.S. Court of Appeals for the Seventh Circuit, Notre Dame...

Duale Regrets Being Brainwashed By Uhuru, Ruto In Formatin Of jubilee

MY SON WAS BEWITCHED BY MY CO-WIFE WHO WANTED HIM DEAD...

THE MOMENT MY FATHER GOT A PROMOTION AT WORK, MY MOTHER...

Inside NMG’s Growth Plan Amidst COVID-19

September 3, 2020
We use cookies to ensure that we give you the best experience on our website. If you continue to use this site we will assume that you are happy with it.Ok