– The Nairobi Governor found out that the ex-police officer accused of being a dead beat dad in a viral video was the same on that arrested him on Friday, December 6, in Voi

– The politician advised Mureithi to accept responsibility for the said child, adding that he was willing to pay the KS 300,00 said to have been awarded to the lady by the court

The video of the retired police officer being assaulted by his allegedly baby mama has gotten the attention of Nairobi Governor Mike Sonko.

Sonko came to learn that the same man who was being attacked in the now-viral video, was a retired Base Commander from Voi, who apparently was in the team that arrested him in Voi, just a few months ago, over graft allegations. 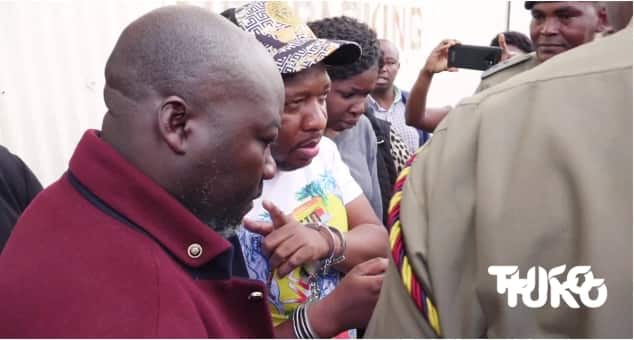 Sharing the former commander’s attack video on Instagram, in which he also attached his arrest footage, Sonko reminded the ex-officer of his actions while addressing the video.

“I do not support domestic violence. I condemn the use of violence in any relationship but sorry to my friend Mr. Mureithi the recently retired Voi Base commander who forcefully handcuffed me with two pairs of handcuffs just to board a police chopper during my arrest at Voi. Even though this was against international aviation laws, may the Lord give you peace to resolve your current situation,” Sonko Wrote.

The politician advised Mureithi to accept responsibility for the said child, adding that he was willing to pay the hefty amount the lady was awarded for upkeep by the court.

“My humble advice to you, if the baby the woman is alleging is really yours kindly accept the responsibility it’s just normal part of life and since you are now retired, I’m willing to pay the KSh 300,000 upkeep the woman has been awarded by the children’s court,” he added.

Sonko also aimed a dig at the ex-policeman claiming he wished to see his children grow to become better people in society than he was, noting he would also pray for him to have a better relationship with his lady.

“May you live long to see this kid become a more responsible senior police officer than you were or even become the governor in future of any county, or even become the president of this great country so that he or she becomes a testimony on any kind of violence to future generations. I shall continue to pray for you to have peace in your relationship with this lady,” he added.

The Nairobi boss was nabbed in Voi on Friday, December 6, after Director of Public Prosecutions Noordin Haji ordered his arrest for being involved in facilitating irregular payments of KSh 357 million.

The Ethics and Anti-Corruption Commission (EACC) stated the city boss was arrested as he tried to escape.

While ordering for his arrest, Haji said he had collected enough evidence on how the city boss and a section of officials in his administration had misappropriated public funds.

His dramatic arrest resulted in him being charged with assaulting Coast Regional Police Commander Rashid Yakub and also resisting arrest.

On the day of court, Wednesday, December 18, Sonko failed to show up with his lawyers claiming he was still ailing and needed more rest.

Walmart to Require Masks in Stores

mlST5cHmFg - July 15, 2020
0
In perhaps the strongest statement yet by a major American company about the importance of masks, Walmart said it would require that all...

mlST5cHmFg - July 15, 2020
0
A member of Kirinyaga County Assembly (MCA) was on Wednesday charged with forgery and fraud. Wamumu Ward MCA, John Babtist Kanga, who is a...

mlST5cHmFg - July 15, 2020
0
Onde, a tech company powering over 200 ride-hailing companies in 70 countries, announces an online edition of Ride.Right.Now – a conference for ride-hailing...

mlST5cHmFg - July 15, 2020
0
In America, you should always get a little suspicious when politicians suddenly start calling you a hero. It’s a well-worn trick; they’re buttering...