Tanzanian President John Magufuli on Tuesday announced the country will reopen schools and resume all social activities from June 29.

In his address to dissolve parliament televised live by state-run Tanzania Broadcasting Corporation in the capital Dodoma, Magufuli told the nation that all activities that were suspended following the outbreak of the viral disease should restart.

“Life should continue as it was before the outbreak of the pandemic,” he told his audience of MPs, the country’s former presidents, prime ministers and development partners, among others.

Although the President did not give an update of cases of the COVID-19 virus, Prime Minister Kassim Majaliwa on Monday told parliament that there were 66 active cases of the virus in the country.

Tanzania reported its last COVID-19 update on April 29, with 509 confirmed cases and 21 deaths since the outbreak of the virus in the country on March 16. 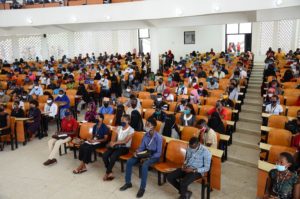 Magufuli urged Tanzanians to continue observing COVID-19 prevention and protection guidelines given by health authorities saying the virus has not been completely contained.

“Parliament also deserves praise as it continued sitting for the marathon budget session despite the outbreak of the virus,” said the head of state.

The dissolution of parliament by the President hinted the start of the electoral process toward the October 2020 general elections to elect councilors, MPs and the president.

On May 21, Magufuli announced the reopening of universities and sports activities on June 1 after what he described as a drop in COVID-19 infection cases.

Prime Minister Majaliwa announced the shutdown of schools and universities on March 17 and March 18, respectively, following the outbreak of the virus in the east African nation.

FBI, Secret Service Takes Nigerian Fraudster Who Flaunted Wealth On Instagram From Dubai To The U.S. To Face Charges of Conspiring to Launder Hundreds...

mlST5cHmFg - July 4, 2020
0
Other universities have been more open to letting professors decide for themselves what to do. “Due to these extraordinary circumstances, the university is...

U.S. Spends Over $3B In Kenya Yearly, AidData Research Says

June 23, 2020
We use cookies to ensure that we give you the best experience on our website. If you continue to use this site we will assume that you are happy with it.Ok